Well, amazingly, our West End run is over and we are back in relaxed mode until our next adventure. We aren't quite sure, yet, what it will be but will post as soon as we know - so 'watch this space'!


Also thanks to Leof Kingsford-Smith for bringing us into the Arts Theatre with him and his show 'The Madness of King Lear', for negotiating the deal with the theatre and for his support throughout. It was a pleasure to work with him and with his fellow actor in 'Lear', Lucas R Tsolakian. It isn't widely known but Leof and Lucas flew our scenery in and out every performance of the show, and we flew theirs. It is very exciting to watch a show from the fly gallery, metres above the stage, and to work the big ropes and pulleys that make scenery appear and disappear on cue.

Thank you, too, for your interest in us. I am sure we'll have some more exciting news before too long.

Cheers,
Kath
Posted by straylight at 09:37 No comments:

Lovely review for both shows by Australian Stage reviewer Rose Hodson who says:

'Rachel Ferris and Kath Perry showed their flexibilty as actresses as they dipped in and out of 'Shakespeare's Queens' performing each role as elegantly as the last.'

'An enjoyable and interesting take on Shakespeare's work.'

It seems incredible that there are only five shows to go to the end of the run.

Hope you can make it in to see the show before we colse.

Cheers,
Kath
Posted by straylight at 05:02 No comments:

Here's some more really lovely feedback on the show:

Urvashi Vashist, writing rather more eruditely than many critics do, on Plays to See says:

'The twenty-odd characters (that's just the Queens - there's 43 altogether - K) are portrayed with razor-sharp singleness of purpose - lightning variation and brilliant intensity every time - by Kath Perry and Rachel Ferris.'

'But the confluence of authoritative, sumptuous certainty and the familiar, ubiquitous ambiguity inherent a dramatic or literary work that derives from - interprets and re-imagines - popular, notorious or otherwise, well-known foundational texts is made double delicious in Shakespeare's Queens...'

While Steve Barfield, blogging on The Lady magazine site wrote:

'It is an interesting historical frame as well as an entertaining one... If you don't know Shakespeare's entire work, then you may well be surprised how many strong parts for queens he wrote into his plays... Kath Perry's Elizabeth I is suitably imperious, mischievous and determined while Rachel Ferris's Mary Queen of Scots is much more girly and vulnerable, bu capable of holding her own against the cousin (Elizabeth I) who had her executed. '

'I was impressed by the range of performances... and the banter between Elizabeth I and Mary Queen of Scots... There is considerable comedy and some moments of genuine pathos in the production...'

Our thanks to these two reviewers for coming in to see the show and for writing such kind things.

While we're talking of reviewers, the Aussies were in last week -  from expat newspaper the Australian Times and from Australian Stage website. I hope they liked us, too!  I'll keep an eye on their websites and let you know!

Meanwhile, this is our last week at the Arts - so, if you haven't been in to see us yet I hope we'll see you soon!

Kath
Posted by straylight at 12:13 No comments:

We are getting some great reviews from Opening Night audience members writing in their blogs. Here's some
samples:

Elizabeth Norton - Tudor Historian and writer of fabulous books about England's Queens
18 October 2012 - I was invited to attend the West End premier of Double Bill at the Arts Theatre. The show (as the name suggests!) is made up of two separate plays which are both inspired by Shakespeare's works. The first, Shakespeare's Queens: She-wolves and Serpents, was amusing and great entertainment, while the second, The Madness of King Lear, provided a very interesting journey into the mind of King Lear himself. I would highly recommend them both.

Tom Norman for Bargain Theatreland
Kath Perry, playing Elizabeth and many others, is the type of performer you could watch every day. The smallest look or movement, intonation of the voice or flick of the wrist tells a myriad of stories. She switches from character to character seamlessly.... Wholly believable in every role, even as the stoic yet witheringly witty Tudor Queen, she is a captivating presence. Rachel Ferris is faultless when it comes to portraying Shakespeare’s female monarchs, and a wonderfully grotesque Puck...Patrick Trumper admirably plays all the men involved.

Tessa Ditner for Kulture Kiddos
Kath Perry and Rachel Ferris dive into the challenge of becoming all of Shakespeare’s queens with Patrick Trumper playing both Shakespeare and every male role. The three-person cast seems to relish the fast pace and obviously enjoy the switching of roles which they appear to manage with ease. This play humanises Shakespeare’s queens, showing them to be ordinary women in extreme situations. They are helped by the brilliant work of costume designer Sarah Cogan, who effectively changes the cast’s appearance with a simple head-dress or a wrap.  Set designer Kasper Hansen has done a beautiful job using the simple use of suspended dresses which gives the stage a doll-house feel.

See you at the Arts Theatre.

Cheers,
Kath
Posted by straylight at 05:55 No comments:

I have to apologise for having been so quiet for the past 3 weeks. I hope no one is feeling too neglected by the lack of communication. Seems like I haven't had a second even to breathe amid the multiple and relentless deadlines of actually getting a show on in the West End.

During that time, we got through the final week of production work, a week of rehearsal for the new space, a crazy three days of 'tech' ie hanging lights and installing the set and putting all the lighting changes/sound/music in place, and then three preview performances, opening night and three more performances.

Soooo, we are now actually playing on the West End and I'm back on the Blog!

Many thanks to all our backers on Sponsume - you are the best! Of course, there's still room for more if anyone else would like to be part of the production. Click on the Queen pic on the right to find out all about it. Essentially, it's a way to spread the huge cost of commercial theatre production over a few more shoulders and save myself and my co-producer from loosing our shirts!

Audiences have been smaller than we'd like but we are working hard to get the word out and encourage people to come.The partnership between us and The Madness of King Lear in our Double Bill is lots of fun. The two plays are quite different and make for a very interesting and varied program which audiences are really enjoying. We have our fingers crossed that the reviewers will like it, too, but we have to wait and see.

Meanwhile, we are getting a huge kick out of performing in the friendly, warm atmosphere of the Arts Theatre and almost as big a thrill from seeing our banner up in lights above the theatre and our posters on the escalators at Leicester Square tube station!

Do come and see the show if you're in London. It seems incredible that, already, there are only 2 weeks of performances left!

See you at the Arts!

Posted by straylight at 03:37 No comments:

Well, here we are, up to our ears in advertising proposals and design sketches and program notes and Heaven knows what else. Excited as all get-out and too busy to be terrified!

BUT, as with all unsubsidised theatre, there is a huge financial risk, which the producer of The Madness of King Lear (or TMOKL as we like to call it) and I have jointly undertaken. This is making us a bit conservative on the spending which could mean a less exciting set, too few ads, not enough flyers in not enough places, actors in their undies, Sydney-based cast and director having to swim to London etc etc.

Which is why we've launched a funding appeal (click on the picture of Shakespeare's Queen to learn all about it). If you know anyone with even a very few dollars/pounds/euros/rupees or roubles to spare, please send them our way. AUS$5 earns our undying gratitude but for AUS$20+ sponsors get to be part of West End History with their name printed in our show program and a copy to keep, autographed by the whole cast and as many of the rest of the team who can be persuaded it is part of their job description.

Do join us and help make this fabulous opportunity a dream come true. Not only for everyone involved in the show but for our audiences, who deserve the best!!!

See you at Leicester Square.
K
Posted by straylight at 12:08 No comments:

OK,
That's the title of our joint production with 'The Madness of King Lear' at the Arts Theatre. And here's our poster 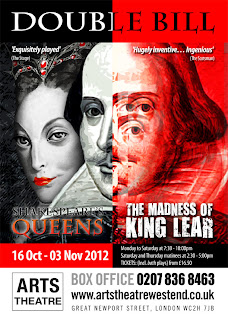 and the back of our flier. 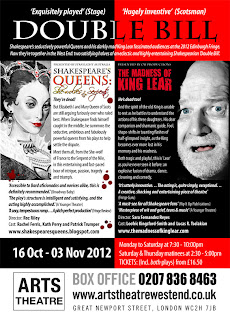 Click HERE to book tickets. Remember we are only on for 3 weeks. Don't miss out!!!

See you in Leicester Square!
Kath
Posted by straylight at 11:55 No comments: 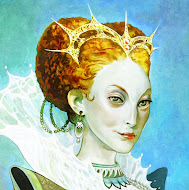 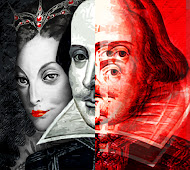 Visit The Madness of King Lear